The book is authored by Dr. Lee R. McDowell, Professor in the Department of Animal Sciences at the University of Florida. Dr. McDowell also wrote the book Vitamin History, The Early Years in 2013.

Dr. McDowell is both an ASAS Fellow and an ADSA Fellow. He is the recipient of international awards from both societies and received the highest honor given by ASAS, the Morrison Award, in 2003.

It is hoped that this book will be useful for teaching the importance of minerals and how discoveries were made. This publication can serve as an authoritative reference book for use by research and extension specialists, in the human, animal, poultry, and veterinary sciences fields and for feed manufacturers, teachers, students, and others.

This book emphasizing history is a second publication on history of nutrients. The first book was published by the present author in 2013 and is titled Vitamin History, The Early Years.

Author Dr. Lee McDowell is a nutritional professor at the University of Florida. In nutrition research he has published over 1500 scientific articles and has written 7 books. Five different nutrition courses have been taught, with a graduate vitamin nutrition course offered over 25 years. During this time period he wrote two editions of both minerals and vitamins textbooks for his graduate class and for courses at other universities. Dr. McDowell is a "Fellow" of two International Societies and has won many awards in teaching and research. From one society he won the highest award available for research (Morrison Award). Internationally Dr. McDowell is well known having made 271 different country visits since 1971. He has given over 500 major talks in 42 different countries. 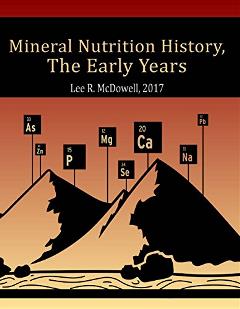