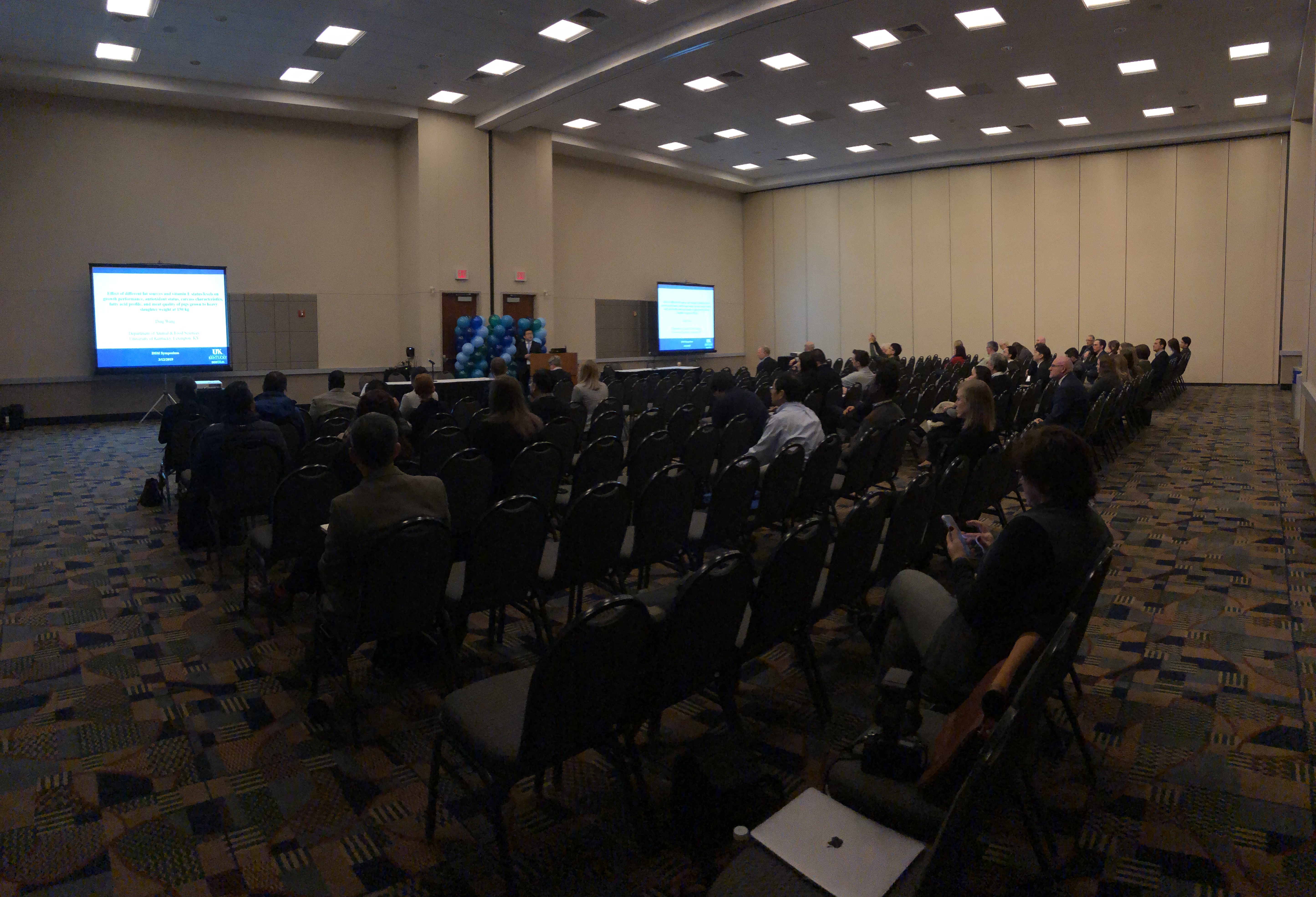 The DSM Symposium that took place on Tuesday, March 12th at the ASAS Midwest Section / ADSA Midwest Branch Joint Meeting focused on nutrition, health, and sustainable living, all important aspects of the Royal DSM global company. In addition to Yanhong Liu, the keynote speaker, four PhD graduates presented their research that was critiqued to ultimately determine who would earn the Science and Technology Award. Chan Sol Park, from Purdue University, began the symposium by discussing the effects of casein in experimental diets on the standardized ileal digestibility (SID) of amino acids in corn distillers dried grains with solubles (DDGS) fed to pigs. The SID of Lys and Phe in DDGS increased with casein, suggesting that amino acids in casein are highly digestible, but the concentration of casein added is important to consider since greater than 60 g/kg of casein decreased the SID of amino acids in DDGS. Overall, Park stated that improving protein quality in experimental diets may influence the SID of amino acids in feeds with low-quality protein ingredients.

Ashley Fowler, from the University of Kentucky, continued the discussion about digestibility, but turned the attention towards phosphorous (P) digestibility in equine. Fowler focused on the importance of understanding factors that influence P excretion in horses since they can excrete substantial amounts. Reducing excess excretion of P in the environment is crucial in regards to environmental sustainability and maintaining animal health overall. From her four experiments, Fowler concluded that horses maintain P homeostasis by recycling the P into the gastrointestinal tract, causing the P digestibility to be underestimated. This needs to be considered when supplementing P in feed to prevent overfeeding P to reduce P excretion.

Next, Yanhong Liu, from the University of California, Davis, focused specifically on the impacts of weaning stress on intestinal development and health in pigs and nutritional intervention to potentially improve the negative effects. Weaning stress can lead to a change in intestinal morphology, weaken the intestinal barrier function, induce transient gut inflammation, and increase intestinal oxidative stress. Feed additives such as exogenous enzymes, prebiotic, and probiotics can potentially improve nutrient digestion and absorption, regulate the gut microbiota, and enhance disease resistance of weaned pigs. Yanhong stressed that health gut is extremely important for weanling pigs and nutritional interventions can be used to improve the efficiency of digestion, absorption, the gut barrier, and the microbial community.

Mario Vailati Riboni, from the University of Il-Urbana-Champaign, also looked at sustainability, but from an industry standpoint with a nutrigenomic approach. The experiments he outlined suggested that restricting feed to optimally conditioned animals improves transition metabolic health, that methionine or yeast-based products can modulate the immune response to improve production and health, and that greater quantity and quality of milk replacer increases mammary gland development. Riboni ended by stating that nutritional management is a quick strategy to improve the industry sustainability and that nutrigenomics is a powerful tool to understand underlying mechanisms and generate future hypotheses/strategies.

Finally, Ding Wang, from the University of Kentucky, wrapped up by analyzing the effects of different fat sources and dietary vitamin E in pigs on antioxidant status, growth performance, and carcass traits. The dietary fatty acid profile was seen to impact the fatty acid profile of pork, beneficial effects of supranutritional supplementation of vitamin E were observed, and interactions were detected between vitamin E and fat sources. Overall, the DSM Symposium focused on innovative research in various fields that are of interest to the DSM, centered on nutrition and health, climate and energy, and resources and circularity. Congrats to Chan Sol Park who was the winner of the DSM Science and Technology Award.