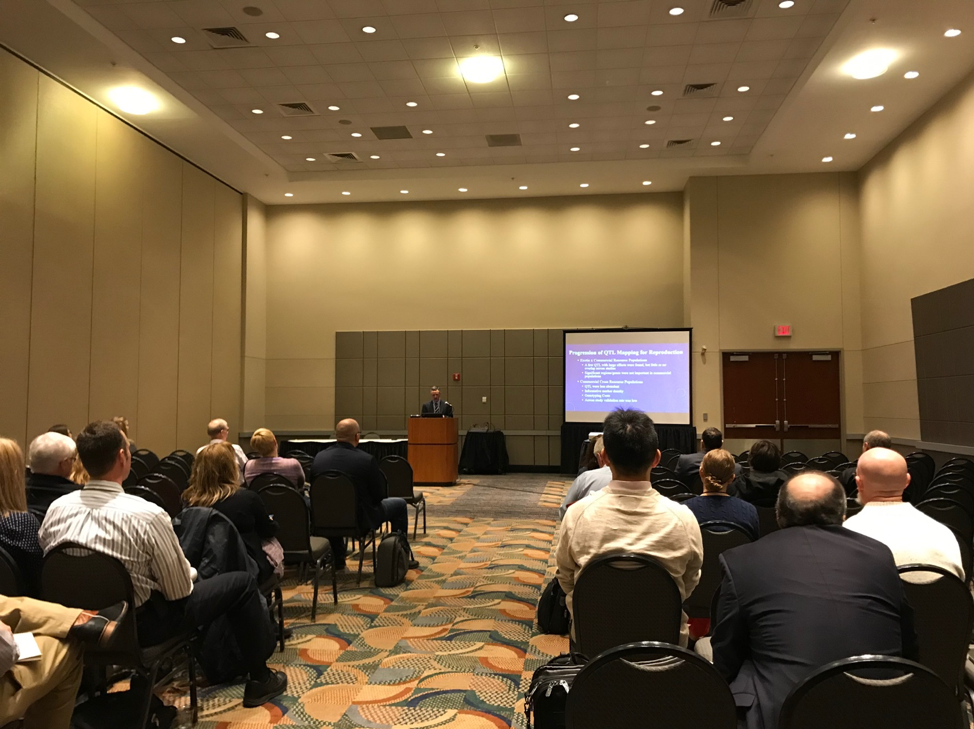 The Wednesday morning Breeding and Genetics: Defining a robust sow symposium started off with Dr. Gary Rohrer presenting on the evolution of a robust sow. Dr. Rohrer took us back 30-40 years to when pig growers were “part-timers” who mainly got in to pay off their mortgage on their house. As you know, a lot of things have changed since then. For starters, there is a much greater capital investment required to have a profitable swine business. Along with many advances in management and housing, among many things there has been increases in litter size. This increased litter size is something Dr. Rohrer attributes in part to the better housing.

Continuing with the conversation of industry improvements, Dr. Rohrer dug into the genetic options that were used to improve production. These options included things like crossbreeding, heterosis, and selection. In the genetic evolution, we saw things such as better breed differences, DNA markers and tests, and QTL mapping. Dr. Rohrer pointed out that while  none of this was a savior for our industry, we continued to gain traction in the goals of increasing the number of pigs weaned per litter, the actual impact being about a 45% increase. Dr. Rohrer attributes this increase to selection.

Other improvements Dr. Rohrer touched on include that sows produce more litters a year, swine are considerably leaner, they grow much faster and have larger mature weights. Overall, Dr. Rohrer showed us that our industry has made many positive improvements over the years that aid in a greater robust sow.

Mr. Ronald Ketchem, an owner of Swine Management Services, continued the discussion of defining a robust sow with experiences gained from the field. The 2018 data for the swine industry just came out and there is a new challenge on the horizon. After a few years of a steady increase in pigs weaned per mated female, there has now been a drop. Where the industry is not sure the reason why as of yet, Ketchem assures us it is being looked into not just by his organization but the industry as a whole.

Other challenges Ketchem mentioned include toe and dew claw issues, he foresees routine trimming of dew claws becoming a common practice. Birthweight is another grand concern of Ketchems, there are more and more small pigs and that’s not what we want to be seeing. Ketchem also cited data that showed piglet birth order on colostrum intake, which concluded that the first 10 piglets have the greatest intake of colostrum but the 16th+ piglet receives a dangerously inadequate amount of colostrum.

In regards to fertility percent, Ketchem discussed how it is a three part variable. Those three parts being semen quality, technician ability, and female fertility that all feed into that fertility percentage. He discussed this further by warning that getting fertility above 90-94% will prove difficult and if you’re consistently riding in the 90% range you are doing well.

Dr. M. Todd See was next to present. He started us off with highlighting that the major focus in the industry thus far to improve sow productivity has been to increase litter size. While this has helped tremendously, we are now seeing that pig birth weight has been declining and these high producing sows require more functional teats and mammary tissue than we are currently seeing. Dr. See also reviewed literature that in summary found as sow litter size increased after a 21 day lactation, sows overall nutritional status determined by wet weight and protein loss were on a linear decline.  This challenge, as Dr. See discussed, will need further investigation to see if there is an upper limit on pigs per litter. He felt this could come back to functional teats.

Dr. See noted that an increase on birth weight has shown to have a positive impact on overall production as well as reproduction. With that, pre-wean factors on lifetime productivity were also discussed. One point showing that higher piglet birth weight proved to increase proportion of gilts farrowing a litter.  A possible solution for the industry challenge, could be to figure out how to reduce the number of low birth weight pigs.

Dr. See concluded with the characteristics he sees in a robust sow. Reviewing that a robust sow would maximize the number of pigs per litter, number of litters per year, and maximize lactation yield. The ideal robust sow would also optimize longevity, lifetime productivity, and pig birth weight. The industries decline in pig birth weight over the years seemed to be a key concern of many presenters and a common topic for the symposium.

Dr. Robert Van Saun stated that it has been proven that commonality exists across species in mechanisms related to health issues involving the transition period. Dr. Van Saun dove into this topic by first discussing transition period, from gestation to lactation, goals that are the same for cows or sows. Some goals he mentioned included low stillborn rate and healthy calves or piglets, supporting high efficient milk production, and minimizing or maintaining body condition score loss postpartum. Feed intake dropping during calving or farrowing are large concerns for both industries. Dr. Van Saun cautions us to be aware of pushing larger litter sizes, based on results they have come to find in the dairy industry.

In summary, Dr. Van Saun pointed out that failure of transition is multifactorial including issues of nutrition, management, and environment. Continuing this point, he discussed the important role of inflammation being shown to contribute to transition failure.

Dr. Joel DeRouchey lead us into our final presentation of the symposium. Presenting that it is primarily common knowledge that feed spill over occurs in swine housing environments; He mentioned grouping thin sows with thin sows and fat sows with fat sows in attempt to limit the thicker sows from gaining on the thin sows feed spill over. Dr. DeRouchey went on to say that if we have sows in the right body condition score, we have solved a lot of possible issues on our farm.

Self-regulation was stressed in terms of allowing sows to eat when they want to eat surrounding farrowing. Dr. DeRouchey discussed literature that showed the sows will self-regulate when fed ad libitum intake, and it will allow for a faster return to intake after farrowing to support her increased energy needs. Proper nutrition in lactation is extremely important. Dr. DeRouchey touched that 1st parity amino acid requirements in lactation increase with litter size and litter growth rate.

To wrap up the Breeding and Genetics: Defining a Robust Sow Symposium, Dr. DeRouchey concluded with a few points he felt we should take home. One being that it is best to avoid feed restrictions after breeding, stating that there is no such thing as excess energy in thin sows at this time. He also concluded that the impact of nutrition on birth weight is modest.  Finding ways to simplify feeding programs, and maximize feed intake in lactation are key points Dr. DeRouchey left us with.