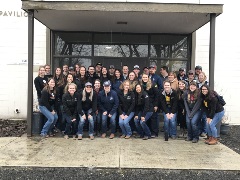 Cal Poly placed 2nd in the double elimination event quiz bowl along with ranking 2nd in written exam. In the Oral Presentation they were ranked first in close competition as quoted by the judges. In the lab practicum, Cal Poly showed their ability to be hands on learners by placing 1stoverall and being the top ranked team in 6 of the 8 eight labs. After the quiz bowl finished, results were announced and Cal Poly was named the overall winner of the contest. This is their first year participating in the last 20 years.

For placing first overall, each team member received a belt buckle and the team received a traveling trophy. Cal Poly will represent the WSASAS at the national AQ contest, which will be July 7th-8th at the 2019 ASAS-CSAS Annual Meeting to be held in Austin, Texas. Winners of each of the 4 regional competitions (Western, Southern, Midwestern, and Northeastern) advanceto the national contest.