On Thursday, May 23rd, the House Agriculture Appropriations Subcommittee met to consider agriculture appropriations for fiscal year 2020.  The bill was approved by voice vote and will move to full committee after the Memorial Day break.  A copy of the bill text can be found by clicking here.  The bill language provides overall spending amounts for agencies but does not get into specific program levels for agencies such as the National Institute for Food and Agriculture (NIFA).  There are limited details available until the committee report is released.

According to the committee, the overall funding for agricultural research in the bill is $3.257 billion, which is $387 million above the President’s budget request.  This includes funding for both NIFA and the Agricultural Research Service (ARS).  ARS would receive $1.344 billion for Salaries and Expenses, including $13.1 million to support the transition to the National Bio and Agro-Defense Facility (NBAF).  The bill provides $50 million for ARS Buildings and Facilities.  NIFA would receive $1.018 billion for Research and Education Activities, $536 million for Extension Activities and $40 million for Integrated Activities.

The legislation also includes several policy riders related to agricultural research.  The bill includes language blocking USDA’s proposal to relocate the Economic Research Service (ERS) and the National Institute for Food and Agriculture (NIFA) outside the National Capital Region.  The bill also blocks USDA’s proposal to put ERS, currently under USDA’s research mission area, under the Office of the Chief Economist, which is under the Office of the Secretary.  The committee also added language requiring USDA to restore on its website in full all animal welfare and horse protection inspection reports that were taken down weeks after the Trump administration took office.

The next step in the process is consideration by the full House Appropriations Committee.  The Senate Agriculture Appropriations Subcommittee has yet to schedule a mark-up for its version of the bill.

On May 21st, the House Committee on Agriculture’s Subcommittee on Livestock and Foreign Agriculture held a hearing to review the nation’s animal pest and disease response capabilities.  USDA’s Marketing and Regulatory Programs Under Secretary Greg Ibach was the lone witness at the hearing.  Much attention was placed on the new programs and funding included in the 2018 Farm Bill to address animal disease preparedness.  Under Secretary Ibach commended Congress for creating the new National Animal Vaccine Bank and the National Animal Disease Preparedness and Response Program (NADPRP) and for providing enhancements to the National Animal Health Laboratory Network (NAHLN).  Support for these programs was a high priority for the animal science and animal agriculture community.

Ibach stated that through the NADPRP program, states, universities, industry and other groups will suggest targeted projects and research that would advance our animal health mission.  APHIS would then evaluate the suggestions and fund the most promising of those projects, relying on USDA’s partners to carry them out.  This is consistent with the model envisioned and supported by the animal science community and animal agriculture industry during the Farm Bill process.  Ibach stated that he wants these new programs up and running quickly and that the implementation process is underway. 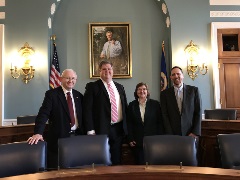 ASAS Holds Snack and Fact on “What is Meat?”

On May 6th, ASAS sponsored a Snack and Fact briefing to address questions surrounding “What is Meat?”  Meat has served as a food source for humans for thousands of years. However, the recent development of non-traditional products prompts the question: What qualifies as "meat?" The briefing provided an overview and discussion of current understanding regarding meat products, and the value of meat and other animal source foods in the human diet. 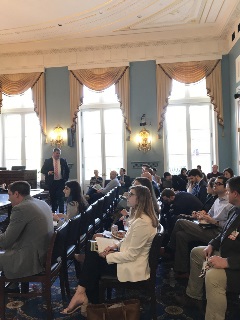 Speakers at the briefing were: Dr. Dale R Woerner of Texas Tech University, Dr. Russell Cross of Texas A&M University and Dr. Penny Riggs of Texas A&M University.  Over 40 staff from the House and Senate attended the briefing, as well as representatives from the animal agriculture industry.  There was a robust discussion about emerging technologies, the definition of meat, and the value of animal protein in the diet.  The group also met with officials at the USDA Food Safety Inspection Service, FDA’s Center for Food Safety and Applied Nutrition (CFSAN) and the meat industry to discuss science and policy related to cell-based technologies.