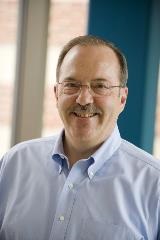 November 4, 2019 – Dr. Terry Etherton is the recipient of the 2019 American Society of Animal Science Distinguished Service Award, presented to him this week during the ASAS-ADSA 2019 Regional Northeast Meeting held in Hershey, Pennsylvania.

Dr. Etherton received a B.S. degree (1971) in Agricultural Science and an M.S. degree (1974) in Animal Science, both from the University of Illinois. He received a Ph.D. degree in Animal Science from the University of Minnesota (1978) and was an NIH Postdoctoral Fellow at Stanford University from 1978-79. In 1979, Dr. Etherton joined the Department of Dairy & Animal Science at Penn State as an Assistant Professor and rapidly rose through the faculty ranks. He was named a Distinguished Professor of Animal Nutrition in 1996, and has served as Head of the Department (now Animal Science) since 1 May 1998. Dr. Etherton is internationally recognized for his research in the area of endocrine regulation of animal growth and nutrient metabolism and was the first to establish that administration of recombinantly-derived porcine growth hormone to growing pigs improved growth rate, increased muscle mass and decreased body fat. He has served as the president of ASAS (2003-04) and FASS (2005-06).