In Memory of Dr. Staigmiller 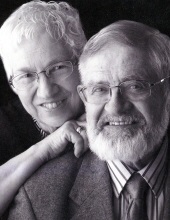 In Memory of Dr. Staigmiller

Robert Berhardt Staigmiller, 83, passed away peacefully on December 2, 2019, in Billings surrounded by his family.

Bob was born on May 22, 1936 to John and June Staigmiller in Great Falls, and grew up on the family ranch near Eden, Montana. Bob loved the Foothills region and would tell stories of “Life over the Baldy,” to anyone who listened. After graduating from high school in Fairfield, Bob served as a Navigator in the United States Air Force and received his PhD from the University of Wisconsin.  Following graduation, the family moved to Miles City, where Bob studied reproductive physiology of beef cattle at the Fort Keogh Livestock and Range Research Station. Following his retirement, they moved to Absarokee, where Bob built a house overlooking the Beartooth Mountains.

While serving in the Air Force, Bob met Nancy Cregier at a youth group work camp in Albuquerque, New Mexico. They were married for 53 years and raised three children: Joe, Kenny, and Donna.

Bob was a gentle, caring soul, a true friend, and was loved and respected by all who knew him. He and Nancy were active in a church wherever they lived and were dedicated supporters of the United Church of Christ’s Camp Mimanagish.

A memorial service celebrating Bob’s life will be held at 11 a.m., Saturday, Dec. 14 at the Community Congregational Church in Absarokee, MT.

In lieu of flowers, memorials may be made to www.singingwatersmontana.org or Heifer Project International (www.heifer.org).