Interpretive Summary: An evaluation of the economic effects of bovine respiratory disease 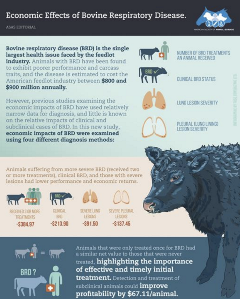 A significant source of losses for the feedlot industry is bovine respiratory disease (BRD), costing nearly a billion dollars annually. A serious disease of the upper respiratory tract, BRD increases costs, decreases production, and is catastrophic to animal wellbeing, causing 75% of morbidity and up to 70% of mortality on the feedlot. Even if animals are successfully treated or survive untreated because they did not show overt symptoms of BRD, their performance is still negatively impacted.

In this January 2020 Journal of Animal Science article, researchers studied the financial impacts of subclinical BRD (disease with no detectible symptoms) compared to clinical BRD (disease with detectable symptoms). They hypothesized that with clinical BRD, performance, carcass traits, and economic outcomes (e.g., hot carcass weight, average daily gain, marbling, and carcass value at slaughter) would be worse than in subclinical disease. The severity of BRD was determined by evaluating four diagnostic criteria: post-slaughter lung lesions, post-slaughter pleural lesions, clinical BRD status, and how many times an animal received treatment for BRD, obtained from veterinary records.

The results of this study supported the researchers’ hypothesis. Steers with clinical BRD had reduced performance and economic returns compared to those with subclinical disease. Animals treated more than three times for BRD had the worst performance outcomes. However, compared to healthy steers, those with subclinical BRD also had reduced performance and economic returns, just not as severe as the steers with clinically apparent BRD. Healthy animals were defined as those who were never treated for BRD and had no lung or pleural lesions post-slaughter.

Overall, this study supports the need for better detection and treatment of subclinical BRD in order to minimize economic losses and improve animal welfare. Despite a lack of overt symptoms, subclinical BRD has negative impacts on animal performance and economic returns. More studies looking into how to recognize and treat subclinical BRD, are justified.