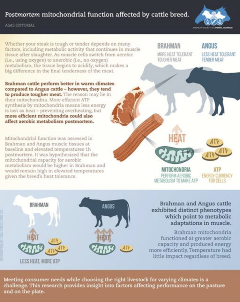 Differences in the mitochondrial respiratory activity of cattle muscle tissue during postmortem metabolism may have significant impacts on meat quality. For example, Angus beef is more tender than Brahman beef, but the reason for this difference is not well elucidated. It is therefore plausible to consider differences in the postmortem metabolism of muscle tissue, which in turn influence pH decline, may vary between cattle breeds, affecting meat quality.

The authors of this Journal of Animal Science study compared postmortem mitochondrial respiratory function of Angus and Brahman cattle, looking specifically at the Longissimus lumborum muscle. Muscle tissue was evaluated at two different temperatures (38.5 and 40.0 degrees Celsius), one-hour postmortem. The authors hypothesized that postmortem mitochondrial metabolism would differ by breed, possibly due to differences in the heat tolerance of each breed. Brahman cattle have better resilience to heat stress than Angus cattle.

The parameters evaluated included expression of various mitochondrial proteins, citrate synthase (CS) activity, and the oxygen consumption rate (OCR) of the Longissimus lumborum muscle.  Results found no differences based on temperature, however, there were significant differences based on breed. Brahman cattle had higher OCR rate and CS activity than Angus cattle. Mitochondria oxidative phosphorylation capacity (OXPHOS) was also higher in Brahman than Angus cattle. However, the expression of CS and mitochondrial proteins were not significantly different between the two breeds.