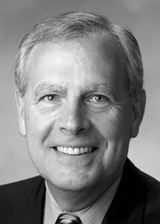 This fund has been formed to recognize the contributions of Dr. Britt. Dr. Britt has decided the dollars will be used in conjunction with dollars from the Zimblem, Hafs, Boyd, & Glenn Clubs to support interns in Washington, DC.

Jack H. Britt established a physiological basis for reproductive problems identified by livestock producers and developed management strategies to minimize detrimental effects on productivity. He has published 590 scientific and technical articles and given seminars in 21 countries. He advised 13 MS and 17 PhD degree students and was named an outstanding teacher at North Carolina State University. He held administrative positions at Michigan State University, North Carolina State University, and The University of Tennessee. Britt has served as chair of ASAS Foundation and member of the ASAS board of directors. Britt and his wife, Frances, are parents of Heather and Stephanie, and he has had active roles in his community and church.

As of December 1, 2012, the Jack H. Britt Appreciation Club is fully funded.

Unfortunately, due to COVID 19 we had to cancel the internships for 2021.  Applications for 2022 will be available in September of 2021.  Please click here for requirements and application instructions.  Applications are generally due in the fall of the prior year.