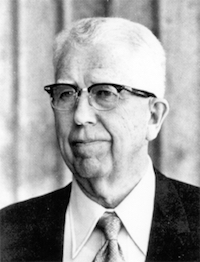 This fund was formed to fund contributions to Graduate Education in Reproductive Physiology.

The complete requirements for the L.E. Casida Award can be found here.
Past award recipients.

Dr. Lester Earl Casida was born in Chula, Missouri on April 9, 1904. He intended to become a high school teacher and attended Northeast Missouri State Teachers College. Upon completion of his B.S. degree in 1926, he decided to further his education at the University of Missouri, where he earned an M.A. degree in Animal Husbandry in 1927. He was offered an assistantship to continue graduate work, but his marriage to Ruth Barnes in 1927, and in 1929 a growing family, caused him to seek teaching positions. The Arizona State Teachers College in Tempe and the Arkansas State Teachers College in Conway provided those positions from 1929 to 1931. He returned to the University of Missouri in the spring of 1931. His mentor there was Dr. Fred F. McKenzie, whose students were characterizing the reproductive anatomy and physiology in farm animals and writing what would become classic papers and bulletins.

Dr. Casida completed requirements for the Ph.D. in 1932 and accepted a National Research Council Postdoctoral Fellowship in Biological Sciences at the University of Wisconsin. Dr. L.J. Cole, founder of the Department of Genetics, was his mentor, and Dr. Casida often referred to Dr. Cole’s accomplishments and mentorship in teaching his own students. In 1934, he was hired as assistant professor in genetics; he attained the rank of professor in 1946 and served in that role until 1974. He retired as Emeritus Professor of Reproductive Physiology, in the Department of Animal Science, and continued to attend campus seminars and research workshops. Dr. Casida collaborated extensively with other faculty in genetics, zoology, biochemistry, animal science and dairy science. Many of his students had professors from these departments on their graduate committees, or as co-major professors.

Early in his career at Wisconsin, Dr. Casida developed a close working relationship with Dr. Arthur B. Chapman, a young faculty member in Genetics who had trained in quantitative genetics with Jay Lush at Iowa State and possessed a strong background in statistics. As a result of this association, which continued throughout their careers, L.E. acquired a passion for understanding experimental designs and application of statistical analyses in biological experiments. The story is that he borrowed one of Dr. Chapman’s statistics books and read it cover-to-cover during his confinement with the mumps. Thereafter, rigorous statistical evaluation of data and conservative biological interpretation became hallmarks of Dr. Casida’s research publications and those of his students in their careers. He and his students and colleagues published 235 peer reviewed articles in such areas as control of the corpus luteum, genetic and environmental factors affecting age at puberty and ovulation rate, the control of estrus and ovulation, effects of energy and protein on reproductive function,  and postpartum characteristics associated with reproduction in livestock species.

Dr. Casida’s research was primarily basic in nature but had considerable practical significance to the livestock industry. He was one of the first to recognize that the corpus luteum, through secretion of progesterone, was a controlling factor of the estrous cycle. This steroid was first used in his laboratory to synchronize estrus and ovulation in sheep (1948) and cattle (1949). As early as 1941, he carried out successful embryo transfer in sheep, and with E.L. Willett, W.G. Black, W.H. Stone and P.J. Buckner, reported birth of the first calf from embryo transfer in 1951. Many studies were conducted to examine genetic and environmental factors affecting age at puberty in swine, cattle, and sheep, and the impact of dietary energy on ovulation rate and embryo survival in gilts and ewes. Research from his laboratory first demonstrated that the uterus played a major role in regulating luteal life span in cattle and sheep (1956). During the 1960’s a major effort was devoted to the endocrine physiology of the postpartum cow. Wisconsin Research Bulletin 270 (1968) on postpartum dairy and beef cows has become a classic. His Hartman Award Lecture summarized the extensive series of studies of genetic and nutritional factors affecting reproduction in female swine.

Dr. Casida’s philosophy with respect to the mentoring of graduate students was best described by him in the Journal of Animal Science in 1966. He stated that: “The emphases in graduate training are to be placed somewhat equally on three things: (1) a sound understanding of the principles underlying the various aspects of animal science; (2) mastery of some of the techniques for gaining new information, coupled with some understanding of how to develop and learn new techniques; (3) the development of an integrating philosophy of research, experimentation and origin of new knowledge.” Honesty and integrity in science and research were emphasized at every opportunity and exemplified in his actions and relationships.

Once a student was given major responsibility for a project, he was expected to carry the research to completion and to develop the ability to think in the field and critically evaluate his own work, and the work of his peers in the lab, as well as the published literature. To this end, Dr. Casida stressed participation in journal clubs and seminars and met with each student every week. He expected students to keep precise records, to use logic to solve problems, and to keep an open mind and eye for unexpected responses. He asked probing questions pertaining to the conduct of the research. Dr. Casida often admonished his trainees not to allow technology to determine the question, but to construct the hypothesis based upon the biology. He expected students to participate in multiple seminars each week and to make platform presentations of their research at scientific meetings of the American Society of Animal Science (ASAS) or the American Dairy Science Association (ADSA), and later at SSR. During Dr. Casida’s academic career, 62 students earned the Ph.D., 49 obtained the M.S. degree, and several postdoctoral trainees benefitted from his wisdom and guidance. These students and trainees were senior authors of the majority of the 235 papers. In recognition of his influence as a mentor in the education of graduate students, the standard of excellence that he set in mentoring each of them, and the contributions of his students to understanding reproductive biology, ASAS presents an “L.E. Casida Award for Excellence in Graduate Education” at each of its Biennial Symposia on Animal Reproduction.

Dr. Casida was an ardent supporter of ASAS, where he served as editor-in-chief of the Journal of Animal Science for 6 years (1949 to 1954) and as president of the society in 1956. He was a charter member of the Society for the Study of Reproduction, albeit with reservations about its possible effects on the pursuit of physiology in ASAS. His concerns have been validated as presentations in basic physiology have declined at ASAS meetings over the years. Cas, as he was affectionately known by his colleagues and students, received the highest honors given by six national and international societies. These included the Borden Award from ADSA in 1954, the Morrison Award from ASAS in 1959, the Carl Hartman Award from SSR in 1975, the Embryo Transfer Pioneer Award of the International Embryo Transfer Society in 1984, and the Spallanzani Award. Dr. Casida’s legacy continues through the research and instruction of his former students and the succeeding generations of trainees who benefit from the heritage of his research ethic and scientific acumen. Former students often sent others to his laboratory, assuring a continuity of his philosophical sphere of influence in development of young scientists. His own three children have all worked in science, Lester Earl, Jr. in industrial microbiology, John in entomology, and Betty in studies in mice with Dr. Chapman.