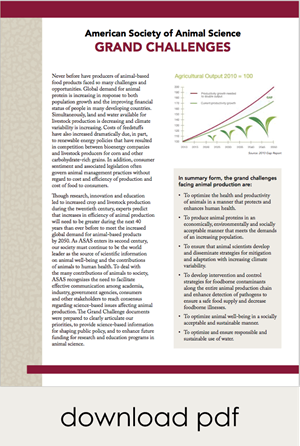 Never before have producers of animal-based food products faced so many challenges and opportunities. Global demand for animal protein is increasing in response to both population growth and the improving financial status of people in many developing countries. Simultaneously, land and water available for livestock production is decreasing and climate variability is increasing. Costs of feedstuffs have also increased dramatically due, in part, to renewable energy policies that have resulted in competition between bioenergy companies and livestock producers for corn and other carbohydrate rich grains. In addition, consumer sentiment and associated legislation often govern animal management practices without regard to cost and efficiency of production and cost of food to consumers.

Though research, innovation and education led to increased crop and livestock production during the twentieth century, experts predict that increases in efficiency of animal production will need to be greater during the next 40 years than ever before to meet the increased global demand for animal-based products by 2050. As ASAS enters its second century, our society must continue to be the world leader as the source of scientific information on animal well-being and the contributions of animals to human health. To deal with the many contributions of animals to society, ASAS recognizes the need to facilitate effective communication among academia, industry, government agencies, consumers and other stakeholders to reach consensus regarding science-based issues affecting animal production. The Grand Challenge documents were prepared to clearly articulate our priorities, to provide science-based information for shaping public policy, and to enhance future funding for research and education programs in animal science.