Grand Challenge: To ensure that animal scientists develop and disseminate strategies for mitigation and adaptation to increasing climate variability. 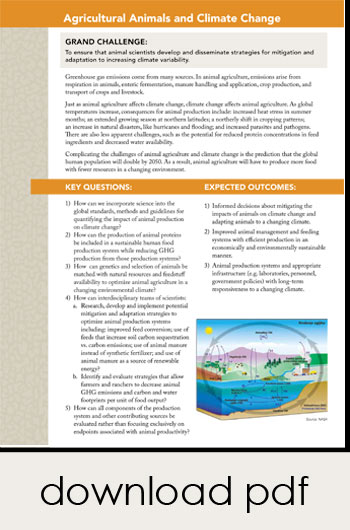 Greenhouse gas emissions come from many sources. In animal agriculture, emissions arise from respiration in animals, enteric fermentation, manure handling and application, crop production, and transport of crops and livestock.

Just as animal agriculture affects climate change, climate change affects animal agriculture. As global temperatures increase, consequences for animal production include: increased heat stress in summer months; an extended growing season at northern latitudes; a northerly shift in cropping patterns; an increase in natural disasters, like hurricanes and flooding; and increased parasites and pathogens. There are also less apparent challenges, such as the potential for reduced protein concentrations in feed ingredients and decreased water availability.

Complicating the challenges of animal agriculture and climate change is the prediction that the global human population will double by 2050. As a result, animal agriculture will have to produce more food with fewer resources in a changing environment.